Ezekiel Prophet Torah ark in Iraq Al Kifl قبر حزقيال (ذو الكفل) – Ancient Torah Closet(Torah ark) Is EMPTY From Torah Scrolls Since 2003 ,They were stolen.
Quote From Benjamin of Tudela Book about The Synagogue At Ezekiel Prophet Tomb In Iraq In The 12th century:”Thence it is half a day to Kaphri, where there are about 200 Jews. Here is the Synagogue of R. Isaac Napcha, who is buried in front of it. Thence it is three parasangs to the Synagogue of Ezekiel, the prophet of blessed memory, which is by the river Euphrates[139]. It is fronted by sixty turrets, and between each turret there is a minor Synagogue, and in the court of the Synagogue is the ark, and at the back of the Synagogue is the sepulchre of Ezekiel. It is surmounted by a large cupola, and it is a very handsome structure. It was built of old by King Jeconiah, king of Judah, and the 35,000 Jews who came with him, when Evil-merodach brought him forth out of prison. This place is by the river Chebar on the one side, and by the river Euphrates on the other, and the names of Jeconiah and those that accompanied him are engraved on the wall: Jeconiah at the top, and Ezekiel p.67at the bottom. This place is held sacred by Israel as a lesser sanctuary unto this day, and people come from a distance to pray there from the time of the New Year until the Day of Atonement. The Israelites have great rejoicings on these occasions. Thither also come the Head of the Captivity, and the Heads of the Academies from Bagdad. Their camp occupies a space of about two miles, and Arab merchants come there as well. A great gathering like a fair takes place, which is called Fera, and they bring forth a scroll of the Law written on parchment by Ezekiel the Prophet, and read from it on the Day of Atonement. A lamp burns day and night over the sepulchre of Ezekiel; the light thereof has been kept burning from the day that he lighted it himself, and they continually renew the wick thereof, and replenish the oil unto the present day. A large house belonging to the sanctuary is filled with books, some of them from the time of the first temple, and some from the time of the second temple, and he who has no sons consecrates his books to its use. The Jews that come thither to pray from the land of Persia and Media bring the money which their countrymen have offered to the Synagogue of Ezekiel the Prophet. The Synagogue owns property, lands and villages, which belonged to King Jeconiah, and when Mohammed came he confirmed all these rights to the Synagogue of Ezekiel[140]. Distinguished Mohammedans also come hither to pray, p.68so great is their love for Ezekiel the Prophet; and they call it Bar (Dar) Melicha (the Dwelling of Beauty). All the Arabs come there to pray[141]. 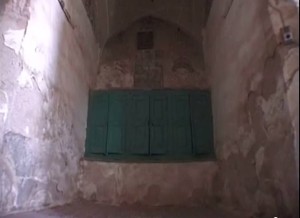